What do you meme? Meme marketing is here to stay - Punch Creative
Skip to content
Back
Blog Social Media
5 min read
November 13, 2019

What do you meme? Meme marketing is here to stay

Memes are everywhere. Funny, entertaining and easy to understand, it’s no wonder why people love them so much (including me!). If I had a dollar for every time someone tagged me in a funny meme, I’d be a millionaire. But there is a lot more value in memes then meets the eye.

In my opinion, memes are genius. They enable brands to cleverly market their products to consumers without being in your face and overly promotional. Go and look at Pretty Little Thing’s Facebook, it’s practically meme central but look at the high engagement rates – just goes to show how powerful memes are.

It should come as no surprise that brands have jumped on the meme bandwagon. Marketers (me included) hijack popular memes to market their products, known as ‘meme-jacking’, and if done properly it creates content which has the potential to go viral. Let’s be honest though, we’ve all seen some heavily branded gag-inducing memes, but let’s not talk about those…

Here are a couple of brands that are slaying meme marketing:

What’s better than dogs? Dog memes. Barkbox knows what they’re doing when it comes to meme marketing, using funny memes to connect with their followers and bring pet lovers together. Don’t even get me started on the high level of engagement, praise goes out to their social media manager! 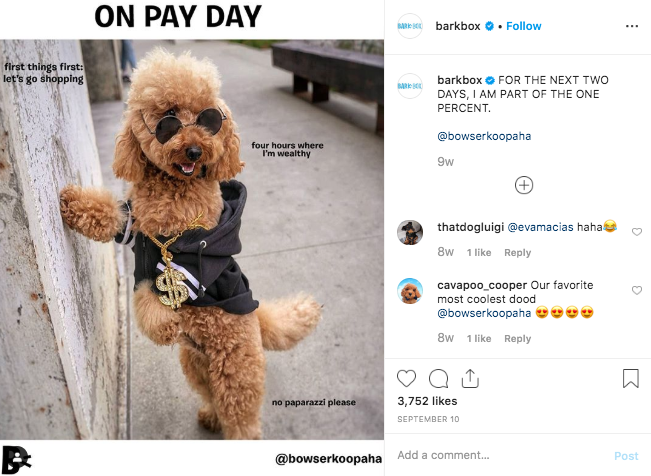 From ‘meme-jacking’ popular memes to create unique ones, there is no arguing that Netflix has a good meme game. With 100s of films, TV series and documentaries at their disposable, the meme possibilities are endless. The streaming giant also recently did a campaign with funny branded contracts (see below), not technically a meme but thought it deserved a shout out! What I love the most about Netflix is how much they understand their audience. Every meme is has been crafted to resonate with followers. You’ve got to appreciate a first-class social strategy! 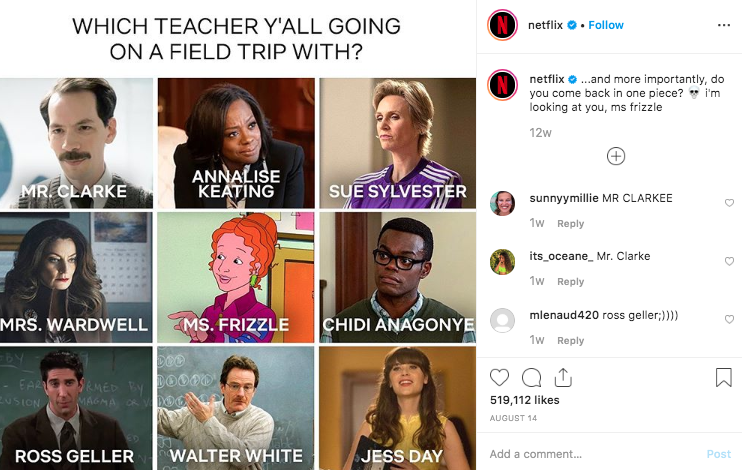 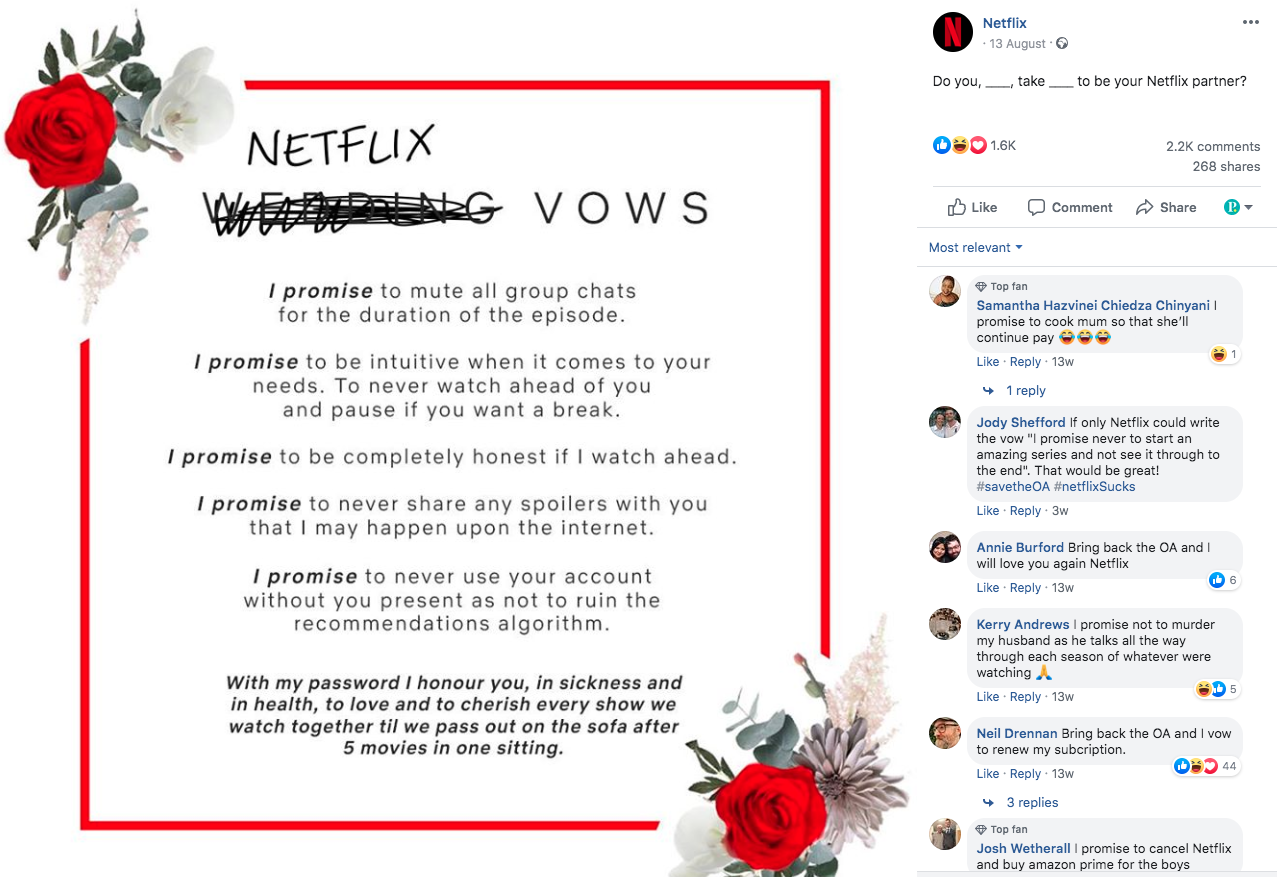 Ok, so it’s not strictly meme creation, but Wendy’s kill it when it comes to sharing user-generated content, and I guess it’s kind of a meme? The company are funny in an understated, low key way which resonates really well with their followers. They also regularly get in meme wars with a competitor, Mcdonalds which is pretty funny. 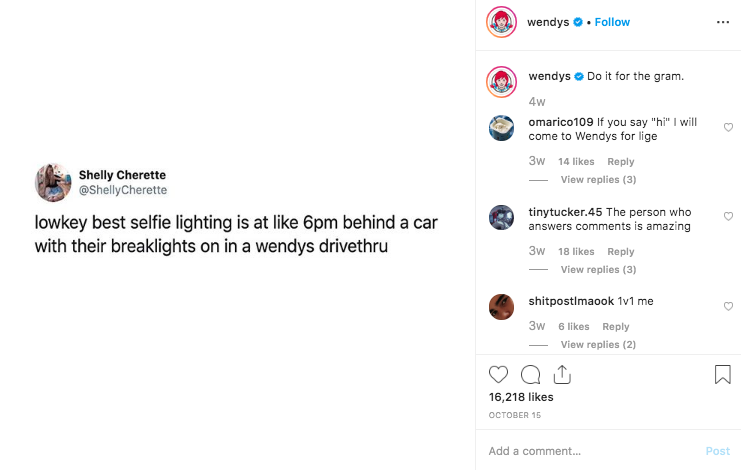 What better way to engage students than with funny memes? SparkNotes offer helpful guides, sample tests and Shakespeare translations and use memes in a genius way on social. With a whole host of memes that relate to iconic literature and Shakespeare plays – very clever! 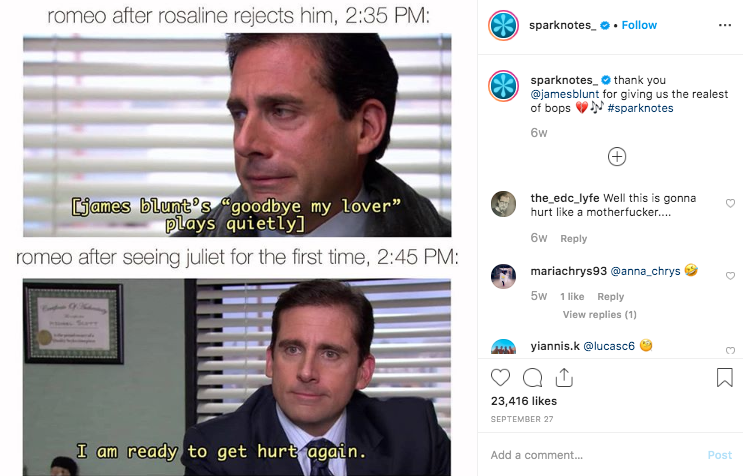